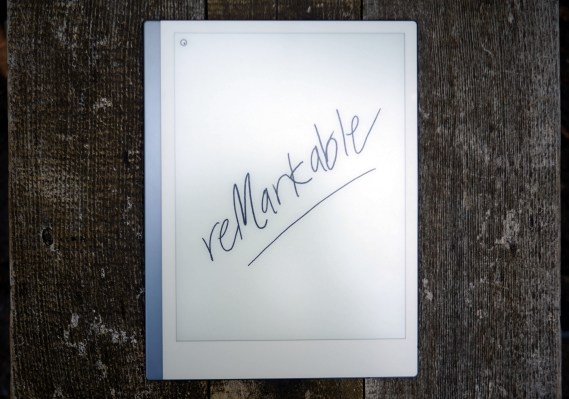 In a rather surprising move, the makers of the reMarkable line of e-paper tablets have added a subscription service to their latest device that enables many of its more advanced features. All current users get a lifetime subscription, and new users get about a year for free, so nothing will change for the most part, but it’s still a huge linchpin for the startup.

The reMarkable Connect service is available in two tiers, a base tier at $ 5 / mo which upgrades you to unlimited cloud storage for your documents, and then a tier at $ 8 / mo which adds access to integration. from Google Drive and Dropbox, handwriting conversion, screen sharing, emailing and quick synchronization. Without a subscription, devices will still sync, but not for unopened files for 50 days (so basically you can’t use it as an archive). Anyone who buys a reMarkable will get up to $ 150 off if they buy a Connect subscription with it, which is pretty much the break-even point in about a year.

On the one hand, it’s an unexpected and somewhat dubious decision: to charge for features that were basically advertised as simply part of the reMarkable suite of tools months ago. And in fact, these features have been launched as regular free features in recent weeks.

On the flip side, it’s somewhat understandable in terms of revenue and pretty much the best way to implement this: Every current user gets it for free, and everyone gets a year for free, and there’s a free option that doesn’t hurt much if you use your device quite carelessly.

I have asked the company to comment on the reasoning behind this decision and will update this post when I have a response.

When I tested the reMarkable 2 last year, I was impressed with the hardware, the responsiveness of the display, and the simplicity of the interface. But as I noted then, despite its strengths, the tablet really remains a niche device. After speaking with the creators on several occasions, I am convinced of their commitment to the vision of a kind of future paper that emphasizes zero focus and distraction. I get it, and I’m definitely into it – but the digital economy is all about distraction and overload, so it must be hard to carve out a piece of that pie.

The company has shipped over 100,000 units and has also raised capital, but dedicated hardware startups are scarce. It’s no surprise that the company is looking for ways to bolster its revenue as computer hardware sales approach saturation.

Who knows, but this could be a game for a larger “focused productivity” sequel, something I would definitely use. My criticisms of the device and the service were that while it did what it did, it performed well, but didn’t do enough. A Chrome extension added article saving, but as a Pocket user I wish I could just log it in. Ditto for other content that would simply be better to discover on the reMarkable. While I appreciate the minimalist philosophy, it seemed arbitrarily limited, and now that there is screen sharing and Drive / Dropbox integration, they can hardly object to the inclusion of other services.

By all means, no email, no chat, no social functions, nothing like that – let me focus! – but let me focus on anything, not just things that fit into the bottleneck of reMarkables services. Anyone could use a little more focus in their life, but it also helps reduce friction to achieve that focus.

Oh, and a front light would be nice too, while I’m making feature requests. Look, my eyes aren’t what they used to be. Help me.