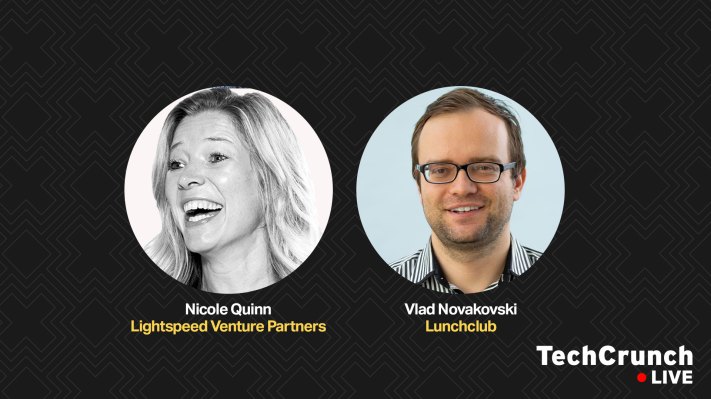 Vlad Novakovski co-founded Lunchclub in 2017 with the aim of improving professional networking. In 2020, the company made a big push towards videos (thanks, COVID) and finally saw enough traction to lift a $ 24.2 million Series A to a valuation of over $ 100 million. Nicole Quinn of Lightspeed Ventures is leading the relaunch.

We’re excited to have the two on TechCrunch Live to help explain how to raise a Series A funding round. They are staying in the living room to give their opinion on the pitch decks presented by the selected startups.

TechCrunch Live also features the TCL Pitch-off, which gives viewers the chance to raise their hands and introduce their startup to our guests, who will give their feedback live.

Nicole Quinn is a leading venture capitalist and her portfolio is impressive, with investments such as Cameo, Zola, Goop, Calm, Haus Laboratories and others.

Vlad Novakovski co-founded Lunchclub in 2017 with Scott Wu and Hayley Leibson. In 2019, the company raised a $ 4 million funding round led by Andreessen Horowitz with other investments from the Quora co-founder, Robinhood co-founders, and Flexport co-founders. When the pandemic struck in early 2020, the company quickly focused on the virtual connection of professionals.

Who contacted whom? What did it take for Quinn to write the check to Novakovsky and his team? How are they working together now? Join us on TechCrunch Live on Wednesday, October 6 at 12 p.m. PT / 3 a.m. ET to find out!